Dr. Jens Heidrich, MD, explains why some people need an anticoagulant and introduces the concept of self-testing, which empowers patients to keep an eye on their coagulation levels by themselves

When does one need to take anticoagulant medications?

Following the implantation of an artificial heart valve, the body reacts with increased blood coagulability. This may produce a blood clot, or thrombus. This is also a risk in atrial fibrillation because here the blood flow is either irregular or too slow, as well as in blood clotting disorders. In order to prevent all this, anticoagulants, also known as blood thinners, are used.

How do anticoagulant medications work?

There are a number of different groups of anticoagulant medications. The so-called vitamin K antagonists are often used. Their name derives from their mode of action, since they are counterparts of vitamin K, which is absorbed from food and is formed by our intestinal bacteria. Vitamin K is very important for blood coagulation. If vitamin K inhibitors are taken, the blood clots more slowly and the risk of thrombosis is reduced. Nowadays, there are also direct oral anticoagulants (DOACs), which according to current opinion, no longer need a check of the coagulation value.

How do you measure the level of anticoagulation?

In order to monitor anticoagulant therapy with vitamin K antagonists, blood is taken from the vein or fingertip. The time it takes for the blood to clot can be measured in the lab with a coagulometer. However, the coagulation level can also be measured directly on the patient most reliably with a small, mobile measuring device. Patients can even check their coagulation level at home at any time. The result is displayed as the so-called INR level.

What does INR mean?

INR stands for international normalized ratio. This worldwide unit indicates to what extent blood clotting is slowed. In a patient with an INR of two, it takes twice as long for the blood to clot compared with a person who is not taking an anticoagulant. INR testing to monitor treatment is usually performed by a family doctor, but it is also possible for patients to measure their INR themselves, which has many advantages.

With self-testing, the patient gains more confidence in the treatment and loses the fear of suffering bleeding and thromboses.

When the heart gets out of rhythm

When the heart needs support

Atrial fibrillation (AF) — when the heart gets out of rhythm

AF is a disorder of the heart rhythm.

In the heart of a person with AF, the heart quivers, or fibrillates, rapidly and irregularly rather than beating effectively. This leads to symptoms such as palpitations and shortness of breath. It also means that blood flow within the heart itself can become sluggish and there is a risk of clot formation on the walls lining the heart, especially within the chamber known as the atrium. This can lead to a heart attack.

Anticoagulants lengthen the time it takes for blood to clot, and therefore reduce the risk of a clot developing.

Deep vein thrombosis (DVT) occurs when a blood clot forms in a vein. It usually develops in the calf muscle, less frequently in the thigh and sometimes in other deep-lying veins in the body.

Some of the common symptoms of a DVT are:

However some DVTs have no symptoms at all.

There may be increased risk of DVT under conditions of:

A pulmonary embolism (PE) is a blood clot in the lung that usually originates from smaller blood vessels in the leg. A clot from a DVT travels to the lungs and through the vessels of the lung until it reaches smaller vessels where it becomes lodged. The clot then prevents any further blood from travelling to that section of the lung, which can eventually lead to stroke.

Common symptoms may include:

All the above can also be symptoms for other conditions; however, a PE can be life threatening, so if you are concerned, seek the advice of a doctor or go to your nearest emergency department.

People who experience a PE may be in hospital for several days until their anticoagulant medication is introduced and stabilized. They may remain on anticoagulation therapy for six months or longer.

Modern heart surgery has transformed the lives of many people who were either born with, or developed as they grew older, damaged heart valves. When heart valves are damaged, the problem is either that the valve is narrow or that it no longer fully closes.

They can now be replaced with either a biological valve (e.g., a pig heart valve treated for use in humans) or a mechanical valve made out of synthetic material. Mechanical heart valves are more durable; however, there is an increased risk of clot formation. To reduce the risk of clotting your doctor may prescribe an oral anticoagulant.

How does blood coagulation work?

Blood coagulation is vital, because without it you would not stop bleeding after an injury. The thickening and clotting of blood is a complex process involving numerous substances produced by the body (e.g., clotting factors and platelets). Coagulation involves three important steps:

In healthy people, coagulation works reliably and potentially dangerous clots are not formed. In other words: the system is in balance.

What types of anticoagulants are available?

For long-term or ongoing anticoagulant therapy, vitamin K antagonists or DOACs can be used. Both are taken as tablets. Vitamin K antagonists are the most common because they have been used for over 60 years, and doctors are familiar with their effects and safety profile.

Why do coagulation levels need to be measured?

When taking vitamin K antagonists, the coagulation level needs to be monitored regularly in order to check whether the optimal dose is being used. If the dose is too low, a clot may form. If it is too high, there is a risk of bleeding. It is important to balance these two risks. To do this, your doctor determines the therapeutic range in which your coagulation level should be.

What do INR value and Quick value mean?

INR stands for international normalized ratio. It is the most common method of measuring to what extent the blood clotting is slowed. For instance, in a patient with an INR of 2.0, it takes twice as long for the blood to clot compared with a person who is not taking an anticoagulant (and has an INR of 1.0).

The Quick value is also a commonly used unit but has become less popular than INR because it can fluctuate greatly. The Quick value is stated as a percentage (normal range: 70–130%) and is opposite to the INR in that a high percentage is equivalent to a low INR, and vice versa.

What is a therapeutic range?

Based on what you’re being prescribed anticoagulants for, your doctor will determine an individualized therapeutic INR range. This is the target range: your INR should not be higher or lower, as this may increase the risk of bleeding or a clot.

These are recommended ranges only. Your doctor will determine what your target INR range is.

How often does INR need to be measured?

What should I watch out for?

If you are receiving ongoing anticoagulant therapy with vitamin K antagonists, there are a few things you should watch out for. For instance, do your best to avoid injuries and cuts because this could lead to increased bleeding. There are also some nutritional and travel considerations to keep in mind — but not to the point where it should interfere with your enjoyment of daily life. Read stories of how people manage their anticoagulant therapy while remaining independent and living life to the fullest here. 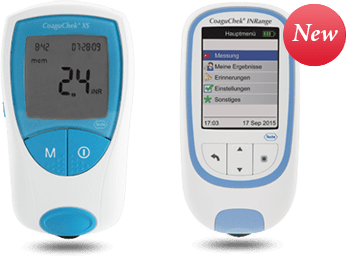