We originally thought that there would be fewer side effects with the new anticoagulants, which is what the studies suggested. However, it is important to observe in daily practice just how these medications work in comparison with the situation described in the study. I think we have already learned a certain amount, and we have discovered that side effects occur even with DOACs.

Can you substantiate this?

An example is gastrointestinal bleeding. The reason for this is related to the mode of action of the DOAC, which, unlike vitamin K antagonists (VKAs), acts directly within the gastrointestinal tract and can thus produce bleeding in patients with previously compromised mucosa. But there are also some patients who develop non-specific adverse effects, like joint pain or nausea.

How do you evaluate the limited monitoring options in DOAC therapy?

This topic is being discussed in an increasingly critical manner. Just visualize a patient who is receiving treatment for hypertension. In this case, regular blood pressure checks are perfectly normal in order to see whether the adjustment is correct. The same applies to patients with diabetes where success monitoring is mandatory with each treatment, regardless of whether it involves testing glucose in the urine, blood sugar, or some other parameter.

I myself take a lipid-reducing drug, and of course I want to check periodically whether it is having the desired effect—lowering my cholesterol. With anticoagulation, we have exactly the same need.

In my experience, patients feel much safer when their treatment is monitored the way it is done with VKAs like warfarin.

Can you substantiate this?

To what extent do the monitoring options with oral anticoagulants offer any advantages?

For instance, for patients who are not very compliant, where we want to know whether they are taking any anticoagulants at all. Another example is surgery or an injury where the treating physician needs to know whether bleeding complications should be expected—where significant concentrations of this anticoagulant might still be in the body before a surgical procedure. When a DOAC is administered, we do not have a suitable measuring procedure in everyday clinical practice.

What is your personal conclusion about modern oral anticoagulant options?

You have to take a very close look whenever a patient requires a new adjustment. What is the situation regarding the approval of the medication in question, and what is the individual constitution of the patient? Furthermore—based on my long experience—VKA patients with a stable adjustment should not be switched to a DOAC.

What you need to know about oral anticoagulation

DOAC or VKA? Criteria for choosing the right treatment

The importance of Coumadin derivatives

About 1% of the general population (350,000 Canadians) is on anticoagulation treatment, and that number is growing by over 10% each year. About 6% of the population over 65 years of age lives with atrial fibrillation (AF), a condition that requires oral anticoagulation to prevent strokes and other serious blood clotting problems.

In addition to AF, anticoagulants are often prescribed to people who have artificial heart valves or who have had a heart attack or other heart diseases that increase the risk of developing blood clots.

DOAC or VKA? Criteria for choosing the right treatment

Unlike with VKAs, the mode of action of DOACs does not need to be monitored. However, while this is often regarded as an advantage, it has come under criticism from an increasing number of healthcare professionals because, especially with non-compliant patients, the absence of a control parameter can become a challenge for the dosage adjustment.

Considerations for choosing an anticoagulant regimen:

The following patient-related factors are important when deciding between a VKA and a DOAC:

For patients in the following subgroups, VKAs (such as warfarin) plus monitoring remain the standard of care where:

Studies involving non-valvular atrial fibrillation indicate that DOACs are at least equivalent to VKAs. Although heavy, especially intracranial, bleeding is reported less frequently than with VKAs, a closer analysis revealed that with correct international normalized ratio (INR) adjustment, these advantages during the thrombosis prophylaxis disappear with VKAs.9 Furthermore, an increased risk of gastrointestinal bleeding has been shown with DOACs.10

When using VKA therapy, the right dose adjustments may be more easily attained when the INR checks are done in the form of patient self-testing.11

The importance of Coumadin derivatives

Anticoagulation with vitamin K antagonists (VKAs) is a long-established and proven treatment option. Moreover, there is a wealth of experience in the use of VKAs.

Patients receiving VKA therapy have very stable coagulation values, especially if they control the monitoring as coagulation self-testers and adjust their anticoagulant dosage themselves. As far back as 2001, a major study revealed that self-managers were able to maintain 80% of their measured levels within the therapeutic range.1 In contrast, this percentage was only 65% in patients who received conventional care. The reasons for the difference were weekly monitoring and the ability to react quickly to INR deviations from the therapeutic range by an immediate dosage adjustment.

Direct oral anticoagulants on the market

In the last few years, several new drugs have been cleared for anticoagulation use. These direct oral anticoagulants (DOACs, formerly referred to as NOACs) offer the following benefits:1,2

DOACs such as dabigatran, rivaroxaban, apixaban, and edoxaban demonstrated non-inferiority with warfarin in prevention of stroke and systemic embolism. Secondary analyses demonstrated superiority for apixaban and dabigatran, 150 mg dose.

In each of these studies, the warfarin group was monitored using the usual care model. Warfarin patients who self-monitored once per week or every other week experienced dramatic increases in time in therapeutic range (TTR) with decreases in adverse events compared to patients managed under usual care.

Rationale: In accordance with the guidelines, anticoagulation is necessary.
Patient self-testing was advised for this patient because studies have shown that patients who self-test remain within the INR target range for longer than with conventional VKA monitoring.1,2 Since the patient is physically and mentally in a position to learn how to self-test, a combination of VKA, INR self-management, and dosage self-adjustment is the most suitable treatment option.

*Fictional patient. May not represent all cases.

Rationale: For this somewhat forgetful lady, a DOAC cannot be considered because of the short half-life: even one missed dose can limit the effects of the anticoagulant. Despite the fact that people older than 80 years can be trained in patient self-testing, it is not suitable for every patient and would not be a good choice for this woman. On the other hand, her INR adjustment could be improved if a caring family member could be trained on how to perform the test.

*Fictional patient. May not represent all cases.

We are here to help

The CoaguChek® Roche Care Centre is here to answer your questions. 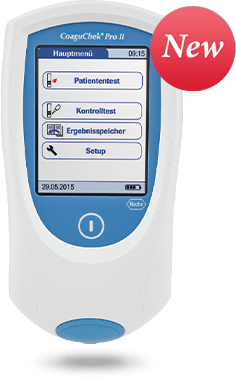